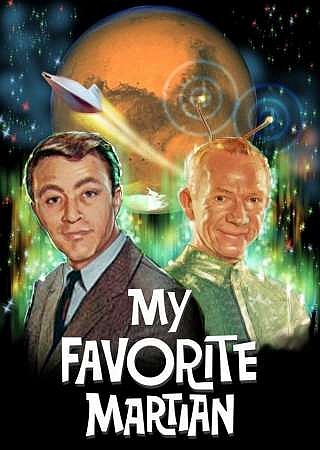 That's right—before he became the Hulk, Bill Bixby palled around with an alien. Small world.
Advertisement:

An American Fantastic Comedy series that aired for three seasons (1963–66) on CBS.

The premise is simple enough: When a 450-year-old Martian anthropologist (Ray Walston) is stranded on Earth after his saucer crashes outside Los Angeles, he is taken in by Tim O'Hara (Bill Bixby), a kindly but none-too-bright newspaper reporter. "Uncle Martin" fortunately looks just like a human being except for two retractable rabbit-ear antennae which emerge from his head. He has some special powers, but not enough to keep himself or his human sidekick out of trouble with their feather brained landlady, Lorelei Brown, and her love interest, Lt. Detective Bill Brennan (starting with season 2), who regards Tim and Martin with suspicion. Nor is Uncle Martin able to repair his saucer, hidden in the garage, possibly because he's not a mechanic.

A movie adaptation of the same name was released in 1999, starring Christopher Lloyd and Jeff Daniels.

Compare with Mork & Mindy, the 1970s equivalent that largely didn't need visual effects to anything like the same degree for its otherworldly effect; Robin Williams was enough.

Not to be confused with "Your Favorite Martian", an animated music video series by Ray William Johnson.