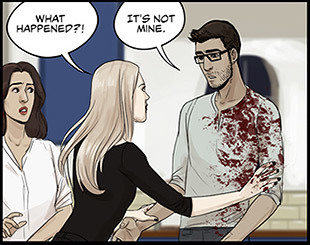 A character is bloody, and the people nearby start to panic, but then the character says something to the effect of, "Don't worry, it's not MY blood." Easy way for writers to create a Wham Line.

Compare Blood Is the New Black, Blood-Splattered Warrior and Blood-Splattered Innocents. See A Bloody Mess when the blood is actually some harmless substance like ketchup. Might be used for Faking the Dead.

Could overlap with Offscreen Moment of Awesome or Noodle Incident if the incident that led to the character being covered in someone else's blood isn't even shown or explained, respectively.