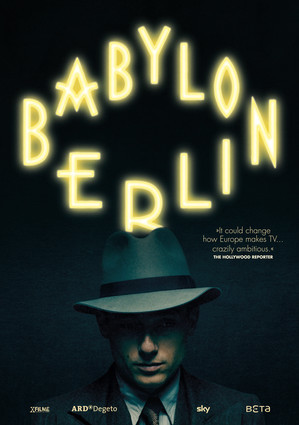 Babylon Berlin is an epic German Neo Noir series created by Tom Tykwer, Achim von Borries and Henk Handloegten. It is set in the capital of the Weimar Republic in 1929, in a time of political upheaval, poverty-fueled crime, and lavish jazz parties, based on the book series by Volker Kutscher.

The show centers on Kommissar Gereon Rath (Volker Bruch), an enigmatic police inspector from Cologne who — sent on a clandestine mission in Berlin by his mayor, Dr. Konrad Adenauer — joins the Sittendezernat, the vice squad of Berlin's police.

In the first two seasons, Rath partners with the volatile Oberkommissar Bruno Wolter (Peter Kurth) and the down-on-her-luck police typist Charlotte Ritter (Liv Lisa Fries) to smash an infamous underground pornography ring that is blackmailing various public figures. But unbeknownst to them, a mysterious train inbound from the Soviet Union gets commandeered by a cell of Communist splitters, bringing thirteen freight cars worth of trouble into a city that itself seems to be teetering on the precipice of a Communist uprising. These seasons are based on the novel Der Nasse Fisch (The Wet Fish), published as Babylon Berlin (A Gereon Rath Mystery) in the United Kingdom.

The third season, which was developed loosely around the second novel in Volker Kutscher's trilogy The Silent Death, has Rath, Charlotte and the homicide department of Berlin investigating a series of murders surrounding the production of a big-budget musical film financed by the underworld. Political conspiracies continue to play out behind the scenes in violent clashes of ideologies all while the stock market teeters on the edge of collapse.

Three seasons have aired so far, being co-produced by Sky1 and ARD. It has been the most expensive non-English television production of its time. The series streams in the US on Netflix. A fourth season is currently planned to air in late 2022.

Not to be confused with either Babylon 5 or Babylon (which has some quite similar themes). For Anglosphere equivalents to the show, see Boardwalk Empire and Peaky Blinders.

Babylon Berlin shows the 1929 stock market crash from the German perspective, describing how it was kicked off by the speculative bubbles created by many banks' irresponsible loan and investment practices.

Babylon Berlin shows the 1929 stock market crash from the German perspective, describing how it was kicked off by the speculative bubbles created by many banks' irresponsible loan and investment practices.