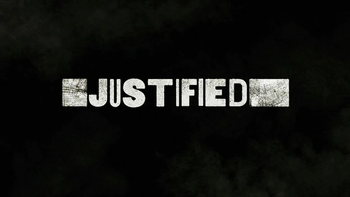 "You'll never leave Harlan alive..."
On this lonely road, trying to make it home
Doing it by my lonesome, pissed off, who wants some?
I see them long hard times to come
— Gangstagrass, Long Hard Times To Come
Advertisement:

Justified is a 2010 FX Network series which ran six seasons; a modern western, based upon the character of Deputy US Marshal Raylan Givens, a recurring character in the works of pulp fiction writer Elmore Leonard.

The series stars Timothy Olyphant (Deadwood, Damages), as Deputy United States Marshal Raylan Givens, a Cowboy Cop in pretty much every sense of the phrase. In the pilot episode, Marshal Givens gives an ultimatum to a Miami gun runner he was investigating for a savage murder: leave town in twenty-four hours or be killed. A broad daylight western-style showdown — where the gun runner pulls his weapon first and makes Raylan's shooting "justified" — quickly follows and leaves Givens in deep trouble with his superiors over the publicity said shooting receives in the media.

To "reward" Raylan for stopping the arms dealer, the Marshal is reassigned to Lexington, Kentucky. Now back in his native Harlan County, the place where he grew up, Raylan must deal with his duties as Marshal (protecting witnesses, tracking fugitives, and arresting bad guys) while dealing with his ex-wife, his estranged criminal of a father, and the dysfunctional and criminal Crowder family, including former coal mining buddy Boyd Crowder (played by The Shield star Walton Goggins), and Boyd's sister-in-law turned girlfriend Ava. That's without mentioning the murderous Bennett clan (headed by the charming but evil Mags Bennett), the alligator-poaching, sugar-smuggling Crowes, and the various agents of the Dixie Mafia and the Detroit Mob.

The series is a mixture of stand-alone episodes and Story Arc; most notably being Raylan's attempt to reconcile with his adulterous ex-wife Winona, Boyd's attempt at redemption after nearly being killed at Raylan's hands (and the subsequent love triangle between him, Raylan, and Ava), the scheming between Boyd and Raylan's respective fathers (both part of the leadership caste of Harlan's criminal underworld), the attempts by a Miami drug cartel to get revenge on Raylan for killing the gun-runner from the pilot, the machinations of the Bennett clan (a group of pot sellers in a long-standing feud with the Givens family) who are trying to exploit the fact that a mining company seeks to set up shop in Harlan, and the attempts by the "Dixie Mafia", the Detroit Mob, and the Crowes to expand their criminal operations into Harlan County.

The series has gotten much acclaim for its successful emulation of the writing style of Elmore Leonard, unlike some previous attempts to adapt his works for TV and movies.

Not to be confused with the tropes.

FX announced in 2022 that Olyphant will return in a limited sequel series, Justified: City Primeval, an adaptation of the Leonard novel City Primeval: High Noon.

their peril".Tim: "Only when I'm handling firearms in public"
We dug coal together.