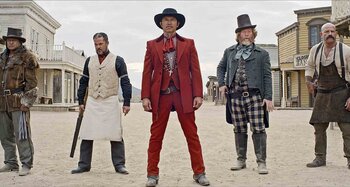 The Western has many tropes and traditions that make it unique amongst adventure story genres, and has developed many different conventions. Just as many character archetypes developed just for the Wild West, so too did archetypal plots. Author and screenwriter Frank Gruber codified seven such basic plots for The Western:

See also Western Characters for another important Western trope, The Magnificent Seven Samurai and A Fistful of Rehashes for other common Western plots, and The Seven Basic Plots for seven basic plots that aren't restricted to Westerns.