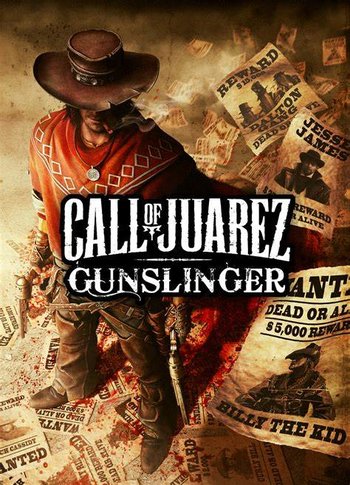 The prototype of the first Call of Juarez game.
There's a time for grievin'
And a time to just pray
There's a time for forgivin'
But it's not for today.
The fourth game in the Call of Juarez series, Gunslinger was released May 22, 2013. Opening in 1910 when the Old West is dwindling, an old gunslinger enters a saloon in Abilene, Kansas. The said gunslinger, now well past fifty, introduces himself as the legendary (albeit former) Bounty Hunter Silas Greaves, and greets the handful of patrons gathered around: Dwight, Molly, Jack, Steve, and Ben.
Advertisement:

Offered a drink by Dwight, Silas is asked if the penny dreadful books about him are true, and if he'd regale them with some tales of his past. Starting with when he crossed paths with Billy the Kid and Pat Garrett, Silas finds himself rambling off his whole career, along with how he fought through half the West all in pursuit of vengeance.

The setting is the Old West again, but the gameplay is less plot-driven and veers away from free exploration towards arcade-like shooting sequences. The game is especially unique through the constant use of Lemony Narrator and Unreliable Narrator, with Silas occasionally arguing with running events and historical fact, claiming involvement in unsolved events, and occasionally chatting with the other patrons.

Released on multiple platforms, the game was met with widespread critical and consumer praise.