Film / Once Upon a Time in the West 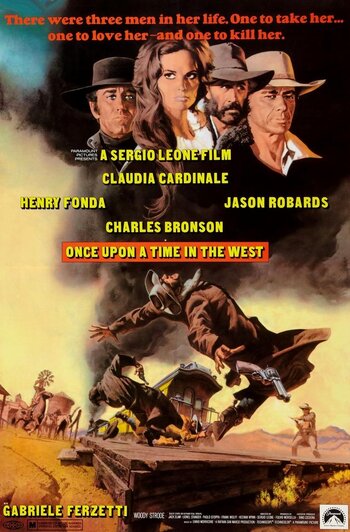 Harmonica: The reward for this man is 5,000 dollars, is that right?
Cheyenne: Judas was content for 4,970 dollars less.
Harmonica: There were no dollars in them days.
Cheyenne: But sons of bitches? Yeah.
Advertisement:

Once Upon a Time in the West (in Italian: C'era una volta il West) (1968) is considered Sergio Leone's masterpiece (alongside the Dollars Trilogy); according to That Other Wiki, it's a prime example of an Epic Western.

It features Claudia Cardinale as Jill, the young widow with a past, Henry Fonda as the villain Frank, Jason Robards as the bandit Cheyenne, and Charles Bronson as a "man with no name" seeking revenge.

City Slicker Jill arrives at the town of Flagstone by train just as Bronson's nameless character drifts into town. By chance, their paths cross at a roadside establishment. Cheyenne, who has just escaped from his prison escort, dubs Bronson's character "Harmonica." Jill then discovers that her husband and his children have been murdered at their homestead. Frank, the real killer, frames Cheyenne.

Harmonica has a personal vendetta against Frank, so he and Cheyenne fight against Frank and his boss, the railroad tycoon Morton (Gabriele Ferzetti). They defend Jill's homestead and discover her late husband's plan to make a fortune.

Based on a story created by Leone, Bernardo Bertolucci and Dario Argento. Under Leone's direction, Ennio Morricone composed the soundtrack before the actual filming started, and most of the narrative is built around the musicnote as demonstrated here

, instead of the traditional way of fitting the soundtrack to the film.

Once Upon a Time in the West provides examples of the following tropes: