Fastest Gun in the West 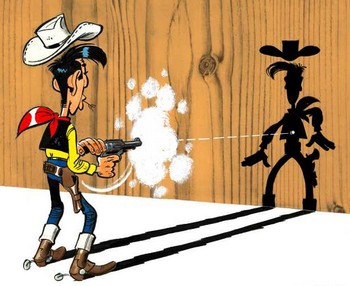 Lucky Luke, proving that the rumor about him shooting faster than his own shadow is Not Hyperbole.
There was 40 feet between them when they stopped to make their play
And the swiftness of The Ranger is still talked about today.
Texas Red had not cleared leather 'fore a bullet fairly ripped
And The Ranger's aim was deadly with the big iron on his hip
(Big Iron on his hip...)
— Big Iron, Marty Robbins, Gunfighter Ballads and Trail Songs
Advertisement:

The Fastest Gun in the West has the ultimate Quick Draw. Nobody can draw and fire a gun faster than this guy. As a result, he wins every duel he ends up in, and others tend to be reluctant to fight him.

However, this fearsome reputation tends to bring unwanted attention. Every two-bit varmint in the state wants to take a piece outta this guy to make themselves more badass. Hence, the Fastest Gun In The West tends to have to keep travelling to try and find a place where nobody wants to fight them.

This character can be a hero or a villain. The heroic type won't bring out his guns unless absolutely necessary, and then only to bring down an outlaw or bandito. The villain is a sneaky bastard who just loves shootin' an' killin', but may be brought low by The Hero's resourcefulness.

If this character ever loses a duel, his mantle passes on to the one that killed him, who must then endure the same curse that the former fastest gun put up with.

It should also be noted that being the fastest gun in the west is rarely much help if said character is somehow caught off guard. It hardly matters if one can draw faster than one can blink, it's of no use if one never sees the threat coming. Many a lightning-fast gunslinger meets their end by a bullet In the Back rather than a Showdown at High Noon.