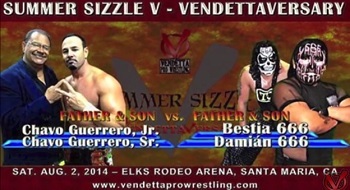 With so many Wrestling Families around, this was bound to happen eventually.
Two households, both alike in dignity,
In fair Verona, where we lay our scene,
From ancient grudge break to new mutiny,
Where civil blood makes civil hands unclean.
— Prologue, Romeo and Juliet
Advertisement:

If the families of the first perpetrator and victim are large enough and roughly equal in power and resources, this can go on for a long, long time. So long, in fact, that it's rather easy for them to forget what the original cause of their fighting was. A feud usually doesn't help the mental health of the individuals or the wisdom of their family culture. This can lead to three most obvious conclusions:

Many depictions of Feuding Families show a Grey-and-Gray Morality, as the feuding parties are not evil but committing cruel acts out of grief and rage.

This scenario offers possibilities to explore all these themes, like the cause of war and peace, hate and forgiveness, right and wrong, and family loyalty. Following Romeo and Juliet, there will often be a pair of Star-Crossed Lovers kept apart by the feud. This is a stock trope for any story about The Mafia or any other similar syndicates.

The origin of the feud is sometimes unmentioned or very vaguely explained, as in Romeo and Juliet or The Adventures of Huckleberry Finn.

Not to be confused with the Game Show Family Feud.

In a Fur Against Fang setting, may result in a Vampire-Werewolf Love Triangle. See also Dueling Dojos and Small Town Rivalry.

This is likely to take place in cultures with a high emphasis on Family Honor. Clashing Cousins is often due to this trope. Compare to Familial Foe. See also Feud Episode for when this kind of thing flares up for a single episode.