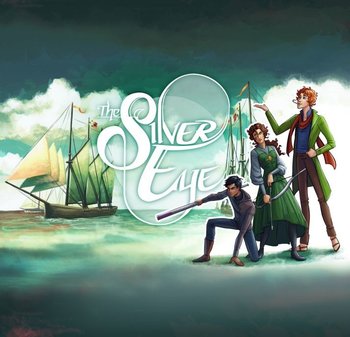 Telescopes! Archery! Venitian Masks! Assassins! Candy Canes?
Apen: Enel, if I were to cross the Deadlands, would you come with me?
Enel: Are you serious?
Apen: No, of course not, don't listen to me when I say things like that.
Enel: Good, because that's the stupidest question I've ever heard.
— Chapter 6, page 16
Advertisement:

is a fantasy webcomic by Laura Hollingsworth.

The continent is divided in two, East and West. A barren desert runs between them, with death to all who enter. To the East lie the countries of Levant; the Hollingsworths of Bellingrath, and the Shephards of Cedulan. The two families are locked in a centuries-old rivalry. To the West lies Preble, Raritan, and Gallitan. The countries are at peace, for now, due to the presence of the mysterious traveller, Velvare Bamidele. He negotiated a treaty between Raritan and Gallitan and took the role as castellan until the prince of Gallitan is old enough to rule.

Fast-forward to 15 years of peace and enter Enel Smith, an orphan in Gallitan. He meets a thief named Apen Shephard, who claims he's a banished King from Levant. Apen's telescope, The Silver Eye, is an artifact from the ancient Nedarian culture of magic. He wants to make the journey back to the East...and Enel has his own reasons for following.

Started in 2009, it's just finished its first volume and has been plotted from start to finish. Updates Fridays. See artist's DeviantArt page here.

Has a Characters page in construction.