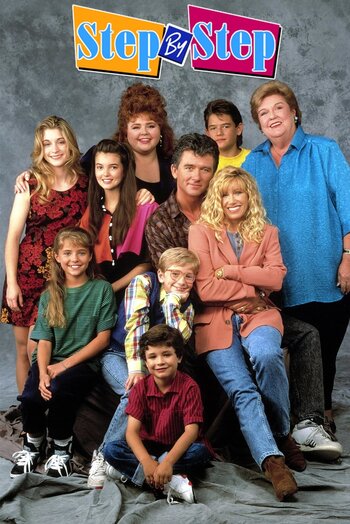 Step by Step is one of the many TGIF comedies on ABC that aired from 1991 to 1998. Although at least partially designed as a vehicle for young actress Staci Keanan (and carrying along with her even younger costar Christopher Castile from their previous series Going Places), star billing for the show went to Patrick Duffy and Suzanne Somers as the parents Frank Lambert and Carol Foster. These two played a couple who, Brady Bunch-style, marry and merge their two households. In an intentional subversion of The Brady Bunch, however, their respective children know and dislike each other already, and forging a single happy family unit out of the conflicts so engendered drove many of the show's earlier plots. Even so, like its spiritual predecessor this Dom Com employed just about every trope in the book.

The Foster side included the smart/sarcastic girl Dana, the flighty girl Karen and the nerdy kid Mark, with the Lambert side including the hip Book Dumb J.T., the tomboy Al(icia) and hyperactive Brendan. Frank's goofy adult nephew Cody lived in his van in their driveway, and would otherwise pop in regularly. A few years into the show Frank and Carol had their own child, Lilly (rapidly aged in her second season, of course).

The show lasted seven years and was popular enough during the time, but hasn't had any lasting influence due to limited post-series Syndication.