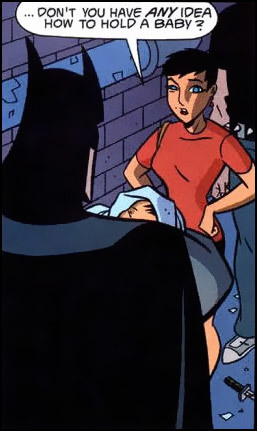 "I am vengeance. I am the night. I... am... incapable of basic child care."
"I grew up in the mountains with my father, who was a knight in his own right. He taught me the arts of war as though I was his son. Of course, lessons in common courtesy were not part of the regimen, so forgive me if I come off as rude, yeah?"
— Ashei, The Legend of Zelda: Twilight Princess
Advertisement:

The character was raised around a bunch of rough guys (or just one) and usually is thus dysfunctional in normal society, especially around women. The trope may use an exaggerated, Testosterone Overdosed version of masculinity.

This situation can be seen as overall positive for a male character as it can only make him "manlier". However, a girl in this situation often becomes One of the Boys or The Lad-ette and, in some cases, may never be seen as a true woman for lacking the mandatory Acceptable Feminine Goals and Traits. In milder cases, I Have Brothers may be invoked instead.

Often comes with the idea in the absence of women, men cannot competently manage a household or raise children, especially babies and little girls. It can set up a Double Standard for Real Life House Husbands and single dads, not to mention gay people. Compare and contrast to Maternally Challenged, which focuses on female incompetence when it comes to raising children.

Sadly, this has a bit of Truth in Television. Several studies indicate that the absence of one of the parents has an unseen, but strong negative effect in the child's psyche that takes a lot of effort to overcome (though it can be done, and there are plenty of first-hand witnesses to that). Of course, discrimination and mockery are not the solution, and occasionally this trope can refer to that. Besides, this is true for single parents in general, not just men. Single moms are just as likely as single dads to screw up raising a child in real life.