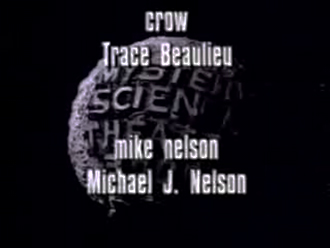 He's the most troublesome puppet to operate, too.
"Whatever your character's name is, people are going to call you that for the rest of your life. Make your character's name 'Will Smith'. And he was so right. And when [me and Alfonso] go out together, people are like "Will! Will!" (yes, hello) "Carlton!" [makes face]"
— Will Smith quoting valuable advice from Alfonso Ribiero

on The Fresh Prince of Bel-Air
Advertisement:

A character whose name is clearly taken from the performer portraying them. This shows up in TV a lot in shows designed as a vehicle for an actor's fame. By lending their name to the fictional character, there's some familiarity created already. The most obvious way to spot this is to see if the title of the show incorporates the lead actor's name, but not always. This seemed to hit its peak in the sitcoms of the late eighties and early nineties. A good majority of sitcoms were based on a stand-up comedian's routine (Tim Allen, Roseanne Barr) and many of these comics already were developing fanbases. Creating the Danza was a way to leverage their fame as a comic into success as an actor.

Another common reason for doing this is that if an actor is famous enough, people will always refer to them by their real name even when discussing them as a fictional character (unless, of course, the character they are portraying is even more iconic, with the exception of said character being played by different actors and/or in multiple media). To avoid the annoyance or awkwardness of this character being constantly referred to as "[Famous name's] character", it's often best to just give them the same first name.

Sometimes this is used for child actors, to make things a little less confusing around the set. This change can happen very late in the production when during shooting it's found that the (very young) child actor does not grasp the concept of a character name different from their real name at all: to give an example, the character name of a toddler actress called Ava being changed to Ava from the originally planned Elizabeth when young Ava doesn't respond or react to Elizabeth.

Also sometimes used for token ethnic minority characters, where it seemed that the program's staff were frightened to think up an original name and just used the name of the actor. In rare cases, it's an accident - the actor chosen to play the character just happened to share a name with the character.

From a directing point of view, using this trope also reduces the number of filming errors, since the actors all go by their real name (or at least, real first name), so the very real (and surprisingly common) mistake of accidentally addressing their colleagues by their real name instead of their character's name is ruled out, cutting down the need of retakes. This was the main advantage of the trope back in the day where film (which cannot be reused and have to be disposed or archived if a mistake was made) was the main recording medium, and has since been lessened with the advent of erasable magnetic media and later, digital. However, it does still save time and effort with the minimization of retakes.

It's not a Danza if the character already has the name from an adaptation; in such a case the character is not being named for the actor.

Not to be confused with an actor or celebrity actually playing themselves. That's As Himself (if they're a main character) or Special Guest (if they show up for a single episode). How to differentiate? Is Bob the Actor playing Bob the Actor? Or does he just happen to be playing a character that's also named Bob? The second one is The Danza.

Compare Character as Himself, Adam Westing, Ink-Suit Actor. See also Name's the Same and Author Avatar. If The Danza is the writer, then it may be Write Who You Know as well as Author Avatar.

Named for Tony Danza, whose frequent portrayal of people named Tony (see Taxi and Who's the Boss?) has made him the butt of a few jokes, for example, this one

for April Fools Day from Teevee.org. See this article

Has nothing to do with Danzaburou.