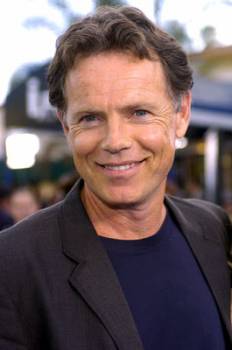 Stuart Bruce Greenwood (born August 12, 1956) is a Canadian actor who is very good at playing down-to-earth, normal, everyday characters - characters you could conceivably bump into at the mall or meet in a bar.

It's rather ironic, then, that his most famous roles involve him in positions of tremendous power - Captain/Admiral Chris Pike in Star Trek (2009) and Star Trek Into Darkness, John F. Kennedy in Thirteen Days, the unnamed President in National Treasure 2: Book of Secrets, and the (presumably different) unnamed President in Kingsman: The Golden Circle.

The quality of his films is hit-or-miss - he's starred in everything from the Lifetime-esque Harlequin TV movie Treacherous Beauties to the charming indie romance The Republic of Love. However, Greenwood is consistently real and wonderful in whatever role he plays - he is frequently the only watchable thing in some of his lesser-quality films.

He also starred in the NBC series St. Elsewhere and the UPN series Nowhere Man, and has guest-starred in various television series.

Oh, and his voice is very, very sexy.

You may have seen him in Eight Below, Rules of Engagement, Ararat, Racing Stripes, and Double Jeopardy, among others. He also does animated voiceovers; he plays Batman in the films Batman: Under the Red Hood and Batman: Gotham by Gaslight, and the animated series Young Justice.