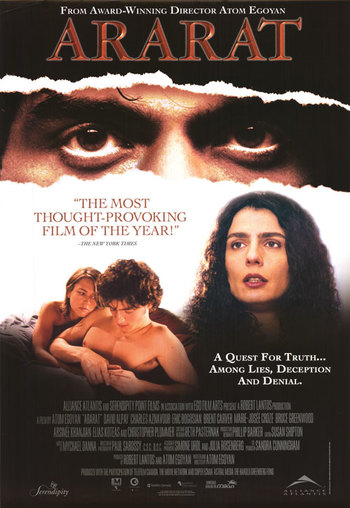 Ararat is a 2002 film directed, written, and co-produced by Atom Egoyan. The film is based around an Armenian-Canadian director named Edward Saroyan attempting to make a Biopic about the life of Armenian abstract artist Arshille Gorky, a survivor of the Armenian Genocide, including scenes from the 1915 Siege of Van. This stirs controversy because the historical events are contested by modern Turkey; for example, a Turkish-Canadian actor becomes increasingly uncomfortable with playing the role of an evil Turkish military officer in Saroyan's film.
Advertisement:

There are also a number of secondary plots. One involves the relationship between Ani, an art historian and expert on Gorky and adviser on Saroyan's fictional film, and her son Raffi. Another features Raffi and a Canadian customs official, David (played by Christopher Plummer), who interrogates Raffi for smuggling film footage of ruined Armenian churches from Turkey needed for Saroyan's movie.