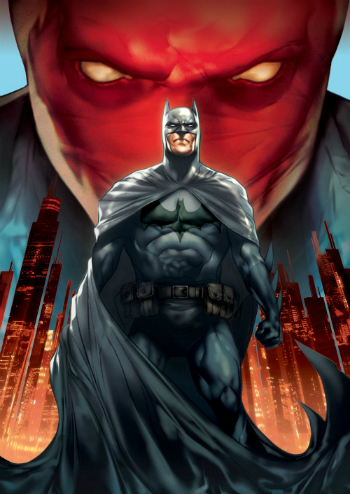 "Dare to look beneath the hood..."
— Tagline
Advertisement:

A film in the DC Universe Animated Original Movies line based on two Batman stories, A Death in the Family and the more recent Under The Hood comic series, from which it derives its title.

The main plot details Batman's investigation into a new criminal who calls himself the Red Hood, who's been murdering the drug lords of Gotham City to force their gangs to work under his rules. This would be standard protocol for a superhero, but Batman's disturbed by how Red Hood always seems one step ahead of him, which only makes it more urgent to discover who he truly is behind his mask.

It goes for Darker and Edgier and is one of the darker and more brutally violent DC Animated films. Voice actors include Bruce Greenwood as Batman, Jensen Ackles as the Red Hood, Neil Patrick Harris as Nightwing, and John DiMaggio as The Joker.

In July 2020, it was announced that this film would be remade

as DC Showcase – Batman: Death in the Family, utilizing a choose-your-own-adventure story path that can deviate from the original movie.

"This is the best day of my life!"