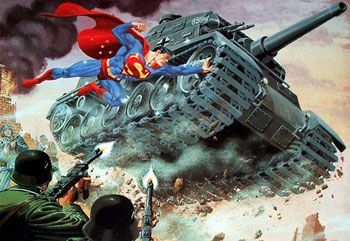 "My generic set of superhero abilities include enhanced vision."
— The Captain, Nextwave
Advertisement:

There's a whole lot of superpowers out there, and many different ways to get them.

Despite this variety, many heroes frequently end up with the Flying Brick set, an assortment of abilities including but not limited to: Flight, Super Strength, Super Toughness/Nigh-Invulnerability, and usually at least one of Super Speed, Eye Beams (or other energy-projection attack), Super Senses, or Super Breath.

These powers seem to be compatible with any given Backstory and Super Hero Origin, which also conveniently explains why any given hero's powers are vastly different from every other hero's flight, super strength, and Super Toughness.

Occasionally comes with a lesser, embarrassing power or a Weaksauce Weakness to "make up for" their incredible power. A common manifestation of the Lightning Bruiser type. Not to be confused with Brick Joke, nor bricks that are thrown during riots or robberies. Spaceships that look like flying bricks are Standard Human Spaceships. Replace Super Strength and Nigh-Invulnerability with the power to shoot/cast Fireballs, Hand Blasts or the like and you get Flying Firepower.

Part of the reason for the popularity of this power set is that it allows for a flexible variety of story situations that are easy to set up within relatively normal human definitions, albeit to a superhuman degree.

The name comes from a flight sim for the Archimedes (Interdictor) from 1989 which specifically used the term Flying Brick Mode for the invulnerability cheat (with a predictable Easter Egg if you switched to external view).

With their demigod physiologies and affinity to mantra, Asura and the Eight Guardian Generals are superpowerful beings capable of fighting monsters threatening all of mankind and the planet they dwell upon.

With their demigod physiologies and affinity to mantra, Asura and the Eight Guardian Generals are superpowerful beings capable of fighting monsters threatening all of mankind and the planet they dwell upon.