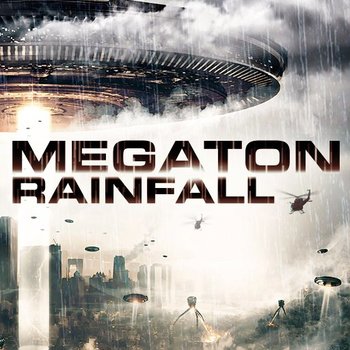 "Is anybody out there?"
Advertisement:

Megaton Rainfall is a game where players take on the role of an immensely powerful Energy Being defending the Earth from an Alien Invasion. It was developed by the Spanish developer Pentadimensional Games and released on October 17th, 2017 for PS4 and PSVR, on November 17th, 2017 for PC through Steam and Oculus Rift, and then on August 8th, 2018 for Xbox One, and on August 9th, 2018 for Nintendo Switch. A trailer can be viewed here

The main story of the game follows a mysterious hypercube named the Signer creating the "Offspring", a Physical God entity that it has tasked with defending Earth from destruction at the hands of the Intruders, a mechanical race of Aliens hellbent on obliterating humanity. What sets the game apart is its ludicrous scale- entire cities can be leveled in one attack, spaceships and buildings will crumble under the might of your blows, and one of the earliest upgrades is turning your maximum speed from Mach 8 to 1 trillion times the speed of light.