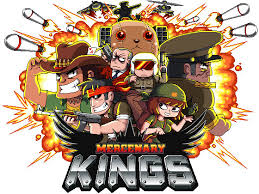 Mercenary Kings is a retro 2D action platformer, created by Tribute Games and released in 2014. When scientist Doctor James Neil develops the Mandragora Serum, a potent elixir that bestows superhuman strength and regeneration, he is kidnapped and his facilities on Mandragora Island are taken over by the terrorist group known as CLAW, who plan on using the serum to Take Over the World. In response, a mercenary group called the Mercenary Kings are dispatched to the island to stop CLAW and rescue Dr. Neil, but something goes horribly wrong. CLAW has already used the serum to mass produce a giant army of super soldiers, robots, mechs and mutated wildlife, and the Kings are ambushed and almost immediately cut down. Only two of the mercenaries survive, King and Empress, and even then they have to be given doses of the Mandragora Serum to survive their wounds.

Now, empowered by the serum and armed with a plethora of weapons, King and Empress are redeployed to Mandragora Island to deliver some well-deserved payback to CLAW and save the world!

The game was designed to recapture both the spirit of the action films of the 1980's and of retro games of the same era, but update it to modern times. Thus, it includes the ability to upgrade your character's weapons and armor, bio-mods to directly implant into the character's body and the Item Crafting mechanic, which allows you to create dozens of weapons for your character. The game's website is here

Oh, and if the sprite work looks familiar, you may recognize it as the work of Paul Robertson, aka the same guy who worked on Scott Pilgrim the game and some episodes of Gravity Falls.

An Updated Re-release, Mercenary Kings: Reloaded Edition, with new playable characters Frigg and C-Zar, was released on February 2018 on all major platforms (PlayStation 4, Nintendo Switch, PlayStation Vita, and Xbox One) and on PC via Steam.