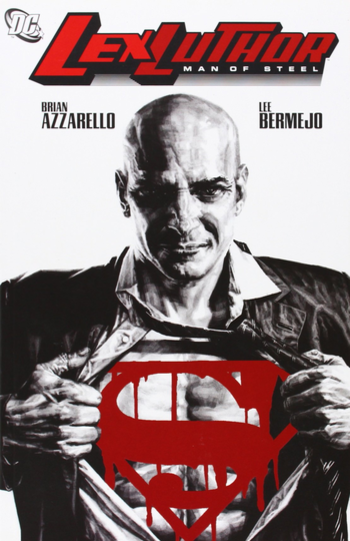 "Those red eyes, I'm sure they look right through me, like I am nothing more than a nuisance. But when I see you? I see something no man can ever be. I see the end. The end of our potential. The end of our achievements. The end of our dreams. You are my nightmare."
— Lex Luthor
Advertisement:

The Alien says that he is humanity's savior. That he fights for "Truth, Justice and the American Way". He makes the entire world love him and look up to him.

And yet, there is one man who can see what a threat the alien truly represents, one man who is willing to stand against the being who has been compared with God: Lex Luthor. The battle will be ugly, but the truth shall prevail.

An Alternate Character Interpretation of Superman's arch-nemesis, Lex Luthor: Man of Steel was first published in 2005 by DC Comics. It's a bit of a departure from other stories about Luthor, which up until then (and indeed for twenty years previous) had shown him as little more than an unrepentant jerk who just wanted to kill Superman. It speaks to humanist traits the character had taken on since about 2000. First is this: when other comics on the stands in 2005 were about Luthor heading up a large Legion of Doom and manipulating Superboy For the Evulz, an empathetic view into the mind of Lex was seen as an odd thing, though not unwelcomed; many readers came away noting that Luthor may have had a point at times. As it turns out, the story was very well-received.

. Works nicely as a companion piece to Azzarello's later work, Joker; even the trade dress, typefaces, and titles (in both incarnations; Lex Luthor: Man of Steel/Joker: The Dark Knight and Luthor/Joker) play up the differences between the two characters.