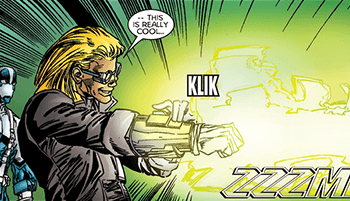 Yes it is.
Nick Fury: Okay, your turn. Prove you're not a Skrull.
Carol Danvers: [destroys jukebox using her energy blast]
Nick: And how is that supposed to prove to me you're not a Skrull?
Carol: That's a Photon Blast.
Nick: And?
Carol: A Skrull can't do that.
— Captain Marvel (2019)
Advertisement:

Hand Blasts are a stock superpower where the character shoots blasts of energy as a projectile out of their hands, palms, wrists, fingertips or fists. "Energy" "Projectile" in this case is a broad term, and can encompass nearly anything: a heat ray, laser bolts, concussive force, whatever. The subject simply points his hand (or finger) at a target, and a Bright Ray O' Doom shines forth. Sometimes it requires activating with the other hand.

Differs from Ki Manipulation and Kamehame Hadoken in that the Hand Blasts are not tied in to the subject's Life Energy or Mana; the energy source is often an external power source or some other form of Applied Phlebotinum. Many instances of this trope imply that anyone can fire the blasts if they simply had the right equipment or circumstance.

May overlap with Arm Cannon if the entire arm/hand is weaponized.

If this is specifically through the palms, see also Power Palms.