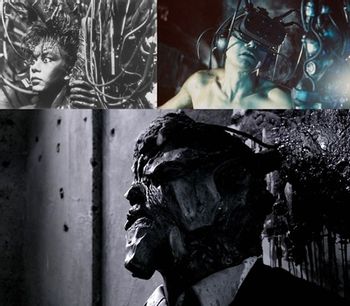 "Your mind and your body don't belong to you."
"Our love can put an end to this fucking world!"
—The Metal Fetishist
Advertisement:

It follows the tale of a man who, after hitting a metal fetishist with his car, attempts to hide the mess by dumping the body into a ravine. To his dismay, he finds that the dead man is getting his revenge — by forcing the driver to transform into a walking heap of scrap metal.

Not to be confused with that Tetsuo or that Iron Man, though there are certainly similarities with the former.