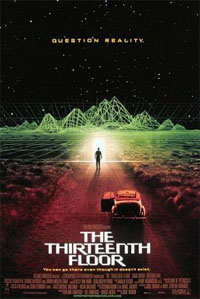 The Thirteenth Floor is a 1999 science-fiction crime thriller starring Craig Bierko and Vincent D'Onofrio based on the 1964 novel Simulacron-3 (also known as Counterfeit World), by Daniel F. Galouye. It had been previously adapted on German television under the name World on a Wire (Welt am Draht).

For years, Douglas Hall (Bierko) has been working with his friend and mentor, Hannon Fuller (Armin Mueller-Stahl), to create a simulated world. Not merely a computer game, their simulation is a Small, Secluded World where the inhabitants don't know that they are simulated. They believe that their world is the real world of 1937, not just a simulation in a cluster of supercomputers at the thirteenth floor of some future skyscraper.

Now someone or something has murdered Fuller, and seem to be trying to pin the blame on Hall. The answer to the mystery is somewhere in the world they created together... But their world is not safe anymore. Simulated humans are awakening to the terrible truth of their existence, wanting revenge on their deceitful creators.