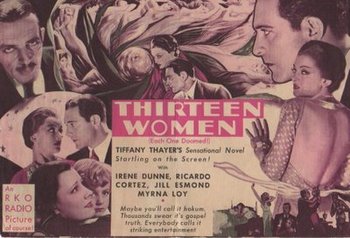 Thirteen Women is a 1932 American pre-Code psychological thriller film, produced by David O. Selznick and directed by George Archainbaud. It stars Myrna Loy, Irene Dunne and Ricardo Cortez. The film is based on the 1930 bestselling novel of the same name by Tiffany Thayer.

Thirteen women, who were sorority sisters at the all girl's college St. Alban's, all write to a clairvoyant "swami" (C. Henry Gordon) who by mail sends each a horoscope foreseeing swift doom. However, the clairvoyant is under the sway of Ursula Georgi (Myrna Loy), a half-Javanese Eurasian woman who was snubbed at school by the other women owing to her mixed-race heritage, eventually forcing Georgi to leave school. She now seeks revenge by manipulating the women into killing themselves or each other. She also goads the clairvoyant into killing himself by falling into the path of a subway train. The victims are set up and killed off one by one until Laura Stanhope (Irene Dunne), living in Beverly Hills, is one of the few still alive.

Peg Entwistle, the woman who later became infamous for jumping to her death from the H in the "HOLLYWOOD" sign, makes her only film appearance as Hazel.