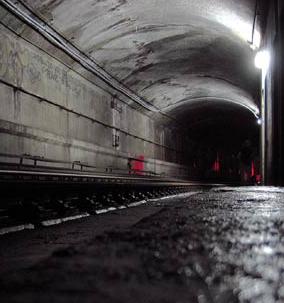 Wazzamatta? Scared?
"Next stop is the end of the line."
— Metro announcer, Final Destination 3
Advertisement:

Subways are a staple of horror. There are long, dirty, abandoned corridors. There are escalators which invite vertigo and all kinds of fatal accidents. There are the endless tunnels, much like the Haunted Castle, but with the added charm only a Water Level with poor lighting and escalating claustrophobia can bring. Full of unexplained echoes, dripping water, clanking metal and chains, and the earthquake-like passing of other (functional) subway trains overhead. There is the subway itself, which can be full of criminals, dangerously overcrowded or ominously empty. And let's not forget the platforms, which can be dimly lit and full of hiding places for all kinds of evil.

Fights that take place here usually have the fight on the platform with only way out cut off and trains constantly passing by waiting to chunk the loser with a Gory Discretion Shot.

Where a Haunted Castle says "Victorian", the Sinister Subway says "art deco" or even "industrial", and can set the tone of this horror game or movie with the broken promises of an industrial age, rather than the forgotten splendor of a Victorian past.

Subways Suck is when they're merely full of inconveniences, though still not enjoyable.

See also The London Underground, New York Subway, Le Métropolitain (Paris's transit system) and Moscow Metro. During the Cold War the Berlin U And S Bahn had actual "Geisterbahnhöfe" or ghost stations.note stations through which trains passed but never stopped