Film / The Thing from Another World 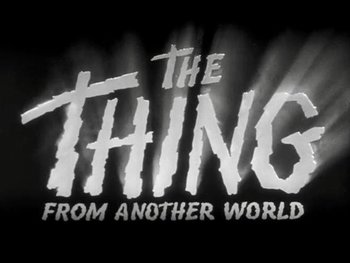 "Every one of you listening to my voice, tell the world, tell this to everybody wherever they are. Watch the skies. Everywhere. Keep looking. Keep watching the skies!"
— Ned Scott
Advertisement:

The Thing from Another World, sometimes just known as The Thing, is the first movie based on John W. Campbell's novella Who Goes There?note the second being The Thing (1982), unless you count 1972's Horror Express, directed in 1951 by Christan Nyby and produced by Howard Hawks.

The premise is one that should be familiar to viewers of horror films: a small group of people find themselves cut off from the rest of humanity—in this case, because they are at the North Pole and the weather is horrible, even interfering with radio communications.

Our hero, Captain Pat Hendry (Kenneth Tobey), and his aircrew along with a stray reporter, fly to the Arctic outpost manned by a scientific expedition under Dr. Carrington (Robert Cornthwaite) to investigate an apparent air crash. It proves to be a Flying Saucer that is accidentally destroyed when the crew attempt to recover it. However they do discover the body of the presumed pilot frozen in the ice. Needless to say he/it (played by a young James Arness) is not dead, and once defrosted wreaks havoc until stopped by 'an arc of electricity'.

While Hawks' actual role in the film's production has long been debated, The Thing exhibits his trademarked overlapping dialogue and assertive female characters who neither scream, nor faint, nor become hysterical at any point in the proceedings. All screaming, fainting and hysteria is supplied by the male cast—and with good reason. The script is a quick patter of wisecracks and one-liners with minimal exposition that keep the plot moving at breakneck speeds. For what it's worth, the cast members have offered conflicting reports, with some saying he effectively directed nearly all of it and others claiming he only supervised the production. Of course, it could just be that Nyby was so influenced by Hawks he merely imitated his style to the hilt.

Tropes contained within this work: