Came from the Sky 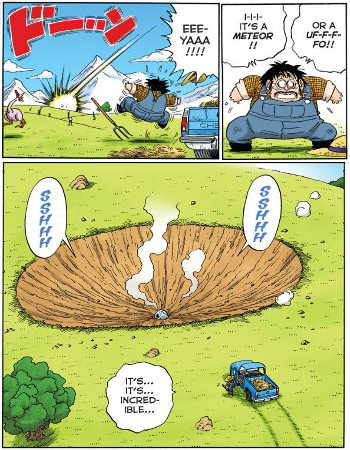 Well, it's not a meteor...
"Oh, it came out of the sky, landed just a little south of Moline
Jody fell out of his tractor, couldn't believe what he seen
Laid on the ground and shook, fearing for his life
Then he ran all the way to town screaming "It came out of the sky."
— Creedence Clearwater Revival, "It Came Out of the Sky"
Advertisement:

An object thought to be a meteorite will come crashing down to earth leaving a large crater, usually in the middle of nowhere, but farms are a popular target as well. The event will be noticed by someone (even in the middle of nowhere) who will be the first on scene to investigate (bonus points if it's a farmer with a shotgun).

What they find at the site will, 8 cases out of 10, be alien, and can range from fully grown adults, sometimes near death, to easily irritated hostile lifeforms, or just a baby. Other findings may include advanced alien tech, capsules holding something bad, or an actual meteorite with unearthly properties.

There's also a second type to this trope, where the impact happened a long time ago and the site was only recently discovered and excavated. Afterward, everything plays out the same.

Also see Magic Meteor, Thunderbolt Iron and Imported Alien Phlebotinum, and Icarus Allusion which can lead into this trope.