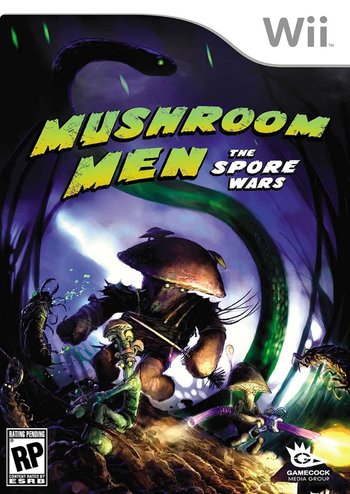 Mushroom Men is a video game series from Red Fly Interactive. The games tell the story of the titular Mushroom Men, as well as various other Funny Plants and Fungi. One evening, a strange meteor from space crash-lands on Earth, blanketing the planet in strange green spores. Scientists warn the easily-frightened Earthlings that there's nothing to worry about—the spores have been researched, and they're not dangerous to humans. Plants, however, are a different matter... And soon, many various plants and fungi of the earth have sprung to life, gaining intelligence and actually-mobile bodies.

For many years, the titular mushroom men live in peace... Until, one day, war breaks out. Villages are ransacked, and only one small sporeling, Pax, sent from a village by the elders, manages to escape. He wanders, confused and alone, until he manages to find his way to another friendly village. There, he discovers that he has the power to absorb pieces of the original meteorite that hit Earth. He accidentally does this to the village's sacred trophy, and vows to help them find a replacement. However, when he sets out on his adventure, he may find that he is more than he seems...

The series starts with The Spore Wars on the Wii and Rise of the Fungi on the DS. In 2015, these were followed by Truffle Trouble on the PC.

If you're looking for the actual trope about mushroom people, see Mushroom Man.