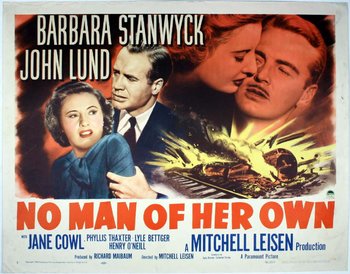 No Man of Her Own (1950) is a Mitchell Leisen Film Noir starring Barbara Stanwyck and John Lund.

Helen Ferguson (Stanwyck) is pregnant and alone: her boyfriend wants nothing with her, so he sends her on a train ride where she meets a friendly couple, Patricia and Hugh Harkness. Unfortunately, the train derails, and her identity is confused with the now-deceased Patricia (Hugh also died in the crash). With no money and zero connections, Helen decides to don the identity.

She finds out the Harkness family is loving and caring, especially Bill Harkness (Lund), and she lives a rather happy life until her ex-boyfriend, Stephen (Lyle Bettger) starts blackmailing her.

Not to be confused with the Carole Lombard and Clark Gable film of the same name.