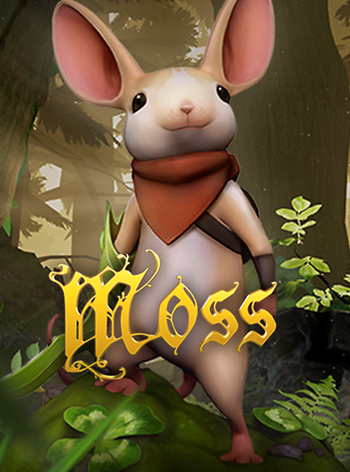 Once upon a time, there was a storybook about a kingdom that fell to the evil of Sarffog, a fire-breathing snake; Set Right What Once Went Wrong; anthropomorphized animals, etc. It's fairly standard for a Zelda knock-off, which is what a lot of people were reminded of when they first heard of the game — a comparison that's not inaccurate. Quill, the mouse heroine, can jump, solve puzzles and wield a one-handed sword, brainsing and fighting her way through the story against a semi-stylized art direction that looks like watercolors.

What Quill has, that most other heroes don't (aside from the ones in Baten Kaitos), is the player, who exists in-game as a mask and a glowing cursor, and is called "The Reader" by characters. There is No Fourth Wall, as Quill can and does address The Reader directly. The Reader can also manipulate the game's world by moving their cursor over interactable objects, holding down shoulder buttons, and then moving the object via DualShock 4 motion inputs. The Reader must control Quill via thumbsticks and face buttons and interact with the world directly to help defeat Sarffog.

Released on February 27th, 2018, Moss has received praise from critics; it has been described as the first Killer App for PS VR, and indeed for VR as a whole, though it didn't stay exclusive for long - the game was later ported to PC and made compatible with every major PC VR headset available (HTC Vive, Oculus Rift and Windows Mixed Reality) in June 2018.