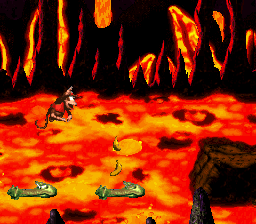 Lava crocodiles? We're in trouble!
Juni: Why is it that every video game has lava in it?
Francis: Technically that's not true. There's no lava in Halo. And in Metroid, it's molten magma.
— Spy Kids 3-D: Game Over
Advertisement:

A stage in a video game, particularly platformers, that takes place in a volcanic area or another area with pervasive heat, such as a flaming tower or factory, a volcanic planet or even a kind of Fire and Brimstone Hell. There are also variants that have a Green Hill Zone or The Lost Woods level that is on fire. Almost always features large lakes of liquid lava. The puzzles and challenges in such an area generally revolve around navigating around flames and lava. Generally, the player will be fine as long as they don't touch the molten rock (Metroidvanias and other Wide-Open Sandbox games avert this as a roadblock, requiring you to find an item or power to safely enter the zone), and may be even able to boat across it on some vehicle. Of course, if they do fall into lava, it won't be pretty (Or it could be pretty funny).

The music in these levels tends to be bass and percussion-heavy, and angry and/or mischievous sounding, often with a tribal-sounding chant. Usually comes late in the Sorting Algorithm of Threatening Geography.

May be a volcano located in Prehistoria or a Death Mountain.

A Sub-Trope of Lava Adds Awesome. Compare Planet Heck. Contrast Slippy-Slidey Ice World. Hailfire Peaks is what you get when you combine this trope and the previous one.

Clockwerk's Lair is a massive, high-tech fortress located in the Krakarov Volcano in Russia.

Clockwerk's Lair is a massive, high-tech fortress located in the Krakarov Volcano in Russia.