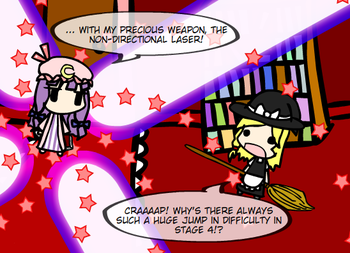 Stage 4: Putting the "Hell" in Bullet Hell.
"I'd like to think of it as taking a comfortable hike through a park, or something fairly smooth. Imagine the process of getting the best ending to be like a sudden 5,000-foot mountain to unexpectedly appear at the end of your hike, with your house nested at the very top of it."
— SomecallmeJohnny describing the Difficulty Spike of Cave Story
Advertisement:

A game that is light and easy suddenly becomes insanely difficult. Perhaps it's bad game design, maybe it's a sadistic developer, who knows? But all of a sudden, the game makes you want to throw your controller through the television.

Nintendo Hard games tend to do this a lot. You can get through five worlds without a scratch... but then you lose all 99 extra lives to That One Boss in 6-4. This is often made worse by the fact that it is usually more of a challenge to master a difficult section of a game if there is no intermediate difficulty with which the player can "work their way up" to being able to manage that particular section. In games where the spike occurs earlier than the very end of the game, it may result in the oddity that the section at the beginning of the spike gives the most trouble to players, while the final boss (even though it may be objectively more difficult) is taken out in a relatively short time, because by then the players have adjusted to the new difficulty.

Compare Surprise Difficulty, where a kid-centric brightly colored game is Nintendo Hard. Difficulty Spike is when a game is easy, then suddenly becomes very difficult. There's no ramp up in-between the easy and hard levels like, say, a medium difficulty level.

That One Boss is a specific instance of this trope incarnated in human (or often non-human) form. Wake-Up Call Boss is for the very first boss fight instance that ramps up the difficulty compared to the previous bosses. That One Level occurs when the spike is confined to a single (utterly hellish) level.

Not to be confused with these other kinds of spikes. See also Schizophrenic Difficulty, for when this happens a bit too often, and Sequel Difficulty Spike, when the difficulty spike happens between two games of the same series.