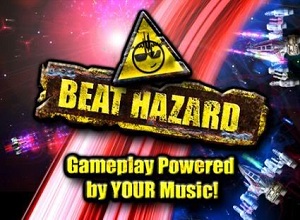 Music is the Weapon! No, really.
"Beat Hazard is designed to overload the senses and batter your eyes from start to finish."
— Starg, confirming our suspicions
Advertisement:

Beat Hazard is an indie twin-stick Shoot 'em Up created by Cold Beam Games debuting on Xbox LIVE Indie Games and has since been subsequently released on PlayStation Network, Steam, DESURA, GamersGate, the Apple App Store, Android OS, and GOG.com. The premise is simple: choose a song, which in this case is a level, and shoot stuff up. The things you'll battle against consists of space junk of varying sizes, small space planes, big space planes, smarter space planes, bigger AND smarter space planes, large twin star-fighters armed with laser cannons and homing projectiles, gigantic battleships armed to the teeth with weapons, and then some. In other words: shoot anything that moves.

Ever played Asteroids? This game should look visually familiar. That is, until the space behind your ship suddenly becomes a psychedelic audio visualization. Your small fighter craft appears in the middle of the screen, things fly in from all sides, and you gotta dodge 'em and shoot 'em. Now, here's the catch: the game's difficulty level is also controlled by your choice of music, not unlike in Audiosurf. Survive the whole song and you complete the level — which means that Epic Rocking equals Marathon Level. Your spaceship's guns shoot faster and harder the faster and louder your chosen song is. And, on top of that, there are power-ups that make the music even louder and, of course, increase the power of your guns. If you need a breather, there's a Smart Bomb that harms everything around your ship's surroundings.

In Standard Mode, you choose a song and play through it, and you're done. Pick a new song, shoot some more bad guys, rinse and repeat. If you prefer, you can engage in Survival Mode and see how many songs you can get through before you lose all your lives. With the addition of Beat Hazard Ultra, the game adds a new variety of enemies (like the Mini-Serpents and Reapers), new game modes like a Boss Rush and the aforementioned Survival Mode, new special weapons to play around with, an even HARDER difficulty level, and more. Upping the ante even further, the Steam version later received the Shadow Ops expansion, which adds 9 new ships which can be unlocked by completing covert Shadow Missions, as well as Steam Workshop support to allow users to create their own ships and share them with the community.

Note that because of the way the game works, relevant music tropes often get paired with a video game trope.

On October 3, 2018, a sequel has been released on Steam as an Early Access title. One of the biggest new features introduced by the sequel is an Open Mic system that allows the game to use music from any source on the computer, such as YouTube or streaming platforms like Spotify. The sequel has left Steam Early Access and was finally released on Steam and GOG.com on October 16, 2019.

This game displays examples of: