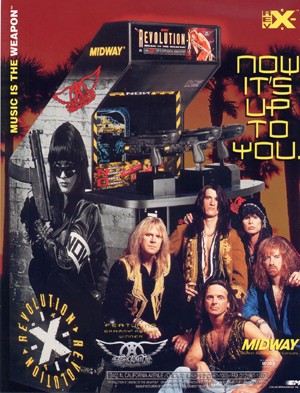 Music is the Weapon!
Aerosmith has been kidnapped by stormtroopers on rollerskates. Are you a bad enough dude to rescue Aerosmith?
— Hardcore Gaming 101
Advertisement:

Revolution X is a 1994 mounted light gun game from Midway Games. Set in 1996, you play a revolutionary who fights against a military faction known as New Order Nation (NON) who have criminalized all things fun and are arresting anyone between the ages of 13 and 30. You set out to stop them and all their heinous actions against the youth with your machine gun and explosive CD launcher alongside your fellow revolutionaries, the band Aerosmith.

Yeah, it's just that kinda game.

For a side-scrolling shooter, the game was pretty impressive, using live action technology and camera zoom-ins and outs to create a rather frantic experience. The game was, of course, also notable for its use of Aerosmith pretty much just as a marketing vehicle for the band. And oddly, it worked; many Gen-X'ers who never had heard of Aerosmith before became fans of them due to their exposure to the game.

While Revolution X was very successful at the arcades, the game did not translate well to consoles. More than one port of Revolution X wound up on the "Worst Games Ever" list of a gaming magazine or review site. Most ports suffered from poor controls and reduced graphics quality, and the game's quarter-munching gameplay didn't mesh well with a small, set stock of lives.

Put simply, Revolution X is akin to an actual Aerosmith concert: pure spectacle, and meant to be played with a crowd. The 16-bit ports on the Genesis and SNES censored the naughty bits and cut graphical quality, eliminating any point to the game. On the other hand, the PC, Sega Saturn and PlayStation ports fared a little better.

Here's a playthrough of the arcade version

For other works by this name, see Revolution. Also, compare with AKB0048, an anime series with a very similar plot.

Remember, Music is the weapon!