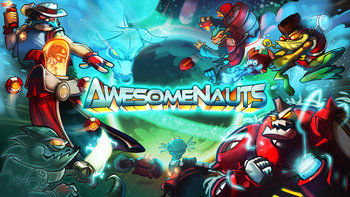 Use your powers, show your might!note Counter-clockwise: Lonestar, Voltar, Leon, Clunk, Froggy G, Yuri.
"The year 3587. Conflict spans the stars. Huge armies are locked into an enduring stalemate. Only one force can help them now: the Awesomenauts!"
—Game intro's Opening Narration
Advertisement:

Awesomenauts is a Free to Play 2D MOBA video game, released on Play Station Network, Xbox Live Arcade, and Steam, from Ronimo Games (The guys who brought you Swords & Soldiers).

A continually ongoing war between the Ones and Zeroes (or the Reds and Blues, just to make things easier) rages on over the universe. In order to bring the fight to a conclusion, a group of mercenaries known as the Awesomenauts have been hired by both sides in order to fight over drills on various planets excavating 'Solar', a precious liquid metal. One side must triumph over the other by destroying their Solar drill, ultimately putting their war efforts on halt.

Right, with the plot out of the way, the game is what takes centre stage from here. Think of the structure of a typical MOBA game (lanes with creeps going down them, turrets at periodic moments, and a base you have to destroy at the end), but recontextualised as a 2D platformer. This naturally opens up some slightly different skill sets to what you'd expect from something like League of Legends, Defense of the Ancients and the like.

With its cast of bizarre characters, brightly-coloured art style and gameplay made more involving in comparison to other MOBA games thanks to the 2D platforming shooter aspect, this can easily be considered a Gateway MOBA.

to raise money for an expansion titled, Awesomenauts: Starstorm, with the hopes of adding a spectator mode and five new characters, amongst other things.

, which will include three new characters and several free additions like revamped matchmaking and redesigns for old characters. Overdrive was released March 2, 2016.

, a sweeping rework of the game that introduced an in-game currency, multiple new cosmetic items, individual character progression and unlocks, and most importantly; made the game free to play.

A Character Sheet is HERE. All tropes exclusive to a certain character go there.