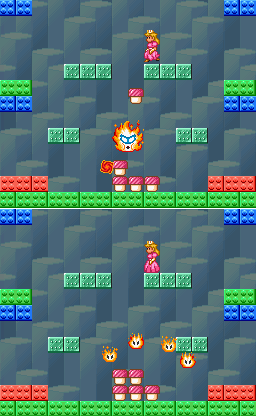 A common type of enemy, the Asteroids Monster is a creature of significant size that, when killed, splits into several miniature versions of itself. Sometimes, killing these may result in further miniature versions, which may in turn split into even smaller versions. There can be any number of stages, although three seems to be the most common number. The Asteroids Monster is often also a Blob Monster.

Sometimes, the miniature versions will grow to normal size if they are not killed quickly with the potential to overwhelm the player if it's allowed to continue for too long. Also, the smaller asteroids tend to be faster than the bigger versions and harder to hit, thus making them even more dangerous. The Asteroids Monster is typically not a boss, but are usually Demonic Spiders or at least Goddamned Bats. It occasionally shows up as the Mini-Boss. If it is an intelligent life-form it isn't always clear if the new individual is a perfect clone of the original one and if the original one is one of the new ones. In supernatural cases it can be justified as the creature capable of dividing its entity. Needless to say, something so different from the human body invokes strong feelings of alien-ess.

The Asteroids Monster is named after the arcade game Asteroids, which featured asteroids that would explode into two small asteroids when hit, which could further be split into even smaller asteroids. The smaller the asteroid, the more points it was worth.