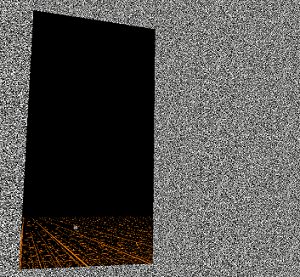 The 4th Wall is a first-person surreal horror game by GZ Storm, the makers of Vidiot Game. It is very bizarre game, taking place in a strange and almost empty void where strange things and jump scares can (and will) happen. With a game complete with static mazes, a giant bleeding worm hanging from the "ceiling", and being in a black pit with eyeballs staring at you, you know that you're in for a Mind Screw.

It was based off of the fears of YouTube Let's Player azuritereaction, such as taking place in a void, being surreal and making no sense, and the game "breaking the fourth wall" by having things from the game pop onto your screen after you've completed the game.

for only $1 on PC and Xbox LIVE Indie Games; older builds are also available on PC for free.

Please do not mistake this one for the similarly-named puzzle-platformer without the similarly screwed-up premise.

Tropes in The 4th Wall includes: