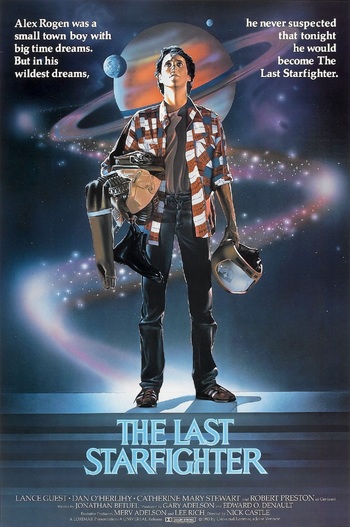 "Greetings, Starfighter! You have been recruited by the Star League to defend the Frontier against Xur and the Ko-Dan Armada."
Advertisement:

What if you got a really high score in a video game, and then got recruited into an adventure where you needed to play the game for real? Well that's what happens in 1984's The Last Starfighter, which serves as both an exploration and a deconstruction of wish fulfillment.

Alex Rogan has spent his whole life stuck in his family's trailer park, but his wish to leave it turns into more than he bargained for when the space-shooter arcade game he manages to beat turns out to have been a test to find the best space pilots in the universe. When Alex discovers that the actual Star League chose him to fight against the very real Xur and the Ko-Dan Armada, he refuses to go along with it. When Alex demands to return home, he finds an android duplicate of himself, Beta, having a tough time playing the role of Alex in the trailer park. After he reluctantly returns to space, the fun really begins.

The Last Starfighter created all of its spaceship effects shots using only computer-generated images (one of the first films to do so), but since it did so during the very early days of CGI, said effects stand out as such. A Cray X-MP rendered all of the film's CGI; as a bit of perspective, the 800 MHz Pentium III processor available to consumers fifteen years later — or the average smartphone of 2012 — matches the processor power of what was then the most powerful supercomputer in the world.

Not to be confused with The Starfighters.

The Last Starfighter provides examples of: