I Have No Son! 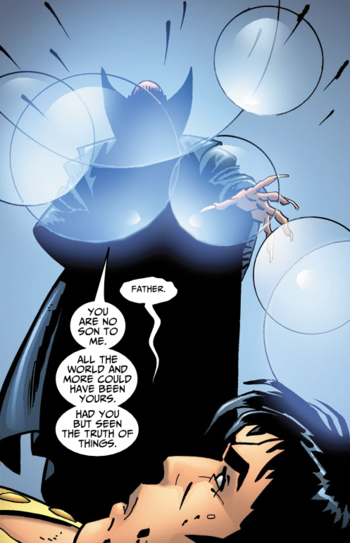 Bart: We came to talk to you about your son.
Krustofski: I have no son! [slams the door]
Bart: Oh, great! We came all this way and it's the wrong guy.
Krustofski: [opens door] I didn't mean that literally! [slams door again]
— The Simpsons, "Like Father, Like Clown"
Advertisement:

Sometimes, what parents want for their children differs from what the children want to do, especially if the parent has plans for the child to Follow in My Footsteps. Sometimes the child wants to be himself in a career the parent dislikes. And sometimes, the parent struggles with this, but eventually comes around and supports his child.

And sometimes he doesn't. And if the child, usually a son doesn't step into line quickly, the offending parent quickly disowns him, disavowing all knowledge that this "son" ever even existed.

Cue the sad violin music — it looks like the kid is going to have to learn to make his own way in this harsh, harsh world all alone.

This doesn't mean that reconciliation is impossible further on down the track. But it usually happens years later, when the kid's a success and often when the parent is on their deathbed, and it's a long, bitter road until that happens.

Rest assured, however, that the chances of this happening are far higher than one might expect. The initial sequence typically takes place in flashback — we only learn the story because the now successful disowned son is giving us a sob story about how much he wishes his father would approve, or at least acknowledge his existence. If we see the event unfold in real time, then usually it gets wrapped up much sooner.

Bear in mind that the parent doing the disowning might not be entirely a jerk; sometimes, the kid just crosses a line they shouldn't cross (especially if they've grown up wrong or done something that violates their parents' trust) and deserves being kicked out with all ties severed. Again, reconciliation isn't an impossibility, but since this kid's bitter and twisted anyway don't expect it happening any time soon. And rest assured that the parent is going to have to justify their actions to the audience explicitly anyway, since the act of disowning one's own flesh and blood for any reason is well, pretty harsh. A justification commonly seen in a Crime and Punishment Series is when the parents essentially disown the child due to a crippling drug habit that the child has plunged into; this is often accompanied with a justification about how "there's only so long you can watch or enable them to destroy themselves before you have to sever all ties."

This trope has various roots — most obvious is the tendency of many writers to be of Jewish descent. Orthodox communities could be particularly unforgiving when it came to children (particularly males) who decided to try making their own way outside of the Jewish community.

Of course, overuse of this term has caused the words themselves to be considered a Dead Horse Trope, if not the entire plot itself. As a result most modern examples tend to skew toward the side of comedy and frequently involve something absurdly trivial. When the question is not about comedy but the descendant actually is the culprit, this trope can constitute Know When to Fold 'Em.

The exaggerated variant of this trope is honor killing, where the parents not only disown the child, but murder him or her.

Can result in Disinherited Child.

See also: Changeling Fantasy, Unperson, and Where Did We Go Wrong?. Not to Be Confused with That Thing Is Not My Child! or with Heir Club for Men, where literally not having a son is the source of the problem. Contrast You're Not My Father, which is the opposite and is more often aimed at a Parental Substitute, and Hates Their Parent, the more general trope for when it's the kid with the issue, not the parent.

Alternative Title(s): I Have No Daughter, Disownment