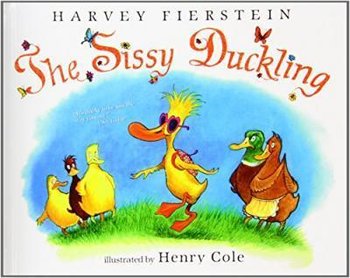 The Sissy Duckling is a children's picture book by Harvey Fierstein and illustrated by Henry Cole. It is a spin on the classic story The Ugly Duckling.

The Sissy Duckling tells the tale of a duckling named Elmer. Elmer is not like other drakes his age. He'd rather stay inside and make nests than play outside. Elmer is quite a feminine drake. His personality causes him to be teased and ostrasized by the other ducks, who call Elmer a "sissy".

The book was given an animated special by HBO in 1999.

The Sissy Duckling gives examples of: