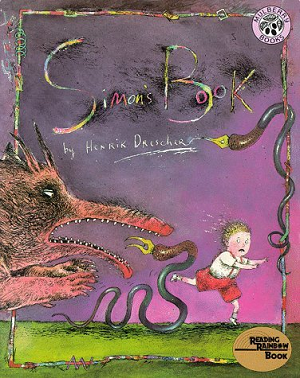 Simon's Book is a picture book written and illustrated by Henrik Drescher in 1983. It won the New York Times Best Illustrated Book award and was featured on the PBS TV Series Reading Rainbow.

The story starts off with a young boy staying up late drawing pictures of a boy named Simon being chased by a large and scary monster. But then, the boy falls asleep before he can complete the drawing.

Within a few minutes, a pair of pens and an ink bottle come to life and meet up with Simon in the drawing. Unfortunately, Simon, the pens and the ink bottle ended up being chased by the large monster throughout the book, and the whole story comes to a surprising conclusion.