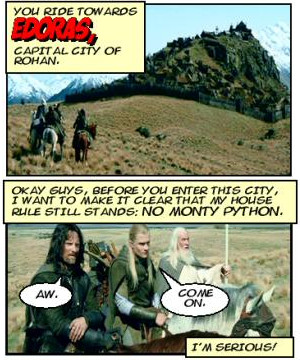 Tigger: Say, who are you?
Narrator: I'm the narrator.
Tigger: Oh, well, please, for goodness' sakes—narrate me down from here!
— The Many Adventures of Winnie the Pooh
Advertisement:

In most series, the Narrator rests comfortably beyond the Fourth Wall, able to tell their story in peace.

The Interactive Narrator isn't so lucky. While this type of narrator exists "off-camera", the characters of the story are fully aware of their narration and are able to interact with them. Author Powers are also not uncommon among these narrators, allowing them to change the entire setting and plot at will.

Hilarity Ensues if the narrator in question is particularly snarky or critical of the characters' actions. This often results in the narrator arguing with the characters like a sort of Dungeon Master. This extends to comedic examples of disgruntled villains attacking or abducting the narrator and attempting to take their place in order to make life miserable for the heroes.

This is a subtrope of Medium Awareness.