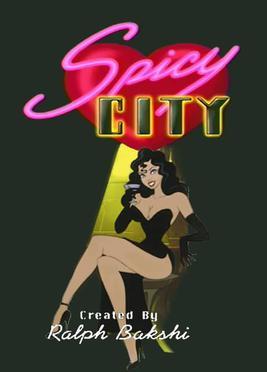 Everyone thinks animation is for kids and families; well, they are wrong.
Advertisement:

Everyone thinks South Park was the first TV-MA-rated cartoon series to be created for American television; they are also wrong.

The first was the forgotten show that is Spicy City, from animation mastermind Ralph Bakshi, a Tales from the Crypt-style anthology series, only the genre is noir-erotica-sci-fi rather than horror, hosted by a woman named Raven who spends her time at a futuristic lounge, telling the stories of the characters that reside in the eponymous city.

After having a major case of creative differences/Executive Meddling with certain projects, HBO contracted Bakshi to develop a cartoon for them after hearing that Trey Parker and Matt Stone were developing South Park. Spicy City managed to beat South Park to the run, but unfortunately proved to not be as popular as its competitor.

Needless to say, Spicy City has developed a cult following. As of 2022, the show still has not received any kind of home video release and it's currently up in the air whether or not the series will be released on HBO Max.

In the meantime, you can watch the episodes here

Tropes that have to do with Spicy City: