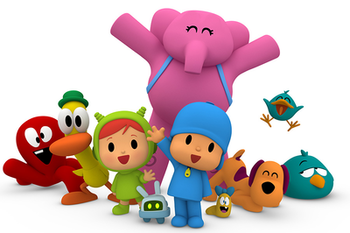 The main cast as of the 2016 rebootnote L-R:Fred,Pato, Nina, Roberto, Elly, Pocoyo, Caterpillar, Loula, Baby Bird and Sleepy Bird.
Pocoyo (2005-10; 2016-present) is a Spanish-British children's Animated Series, narrated by José María del Río, Stephen Fry, or Orlando Arenas (depending on the dub). It tells the adventures of a young boy named Pocoyo, a duck named Pato, the pink elephant Elly, and since the 2016 reboot the girl Nina (and many other characters). In each episode, the characters go through wacky and entertaining adventures commonly learning some kind of Aesop. Notable for its minimalist style — the characters lack any textures and all of the action takes place on a white background — as well as its lack of backstory.
Advertisement:

Also notable for being cute.

In the United States, Cartoon Network's preschool block Cartoonito started to air the show after its launch in 2021.

When Pocoyo and Pato's brick castle falls apart, they blame each other for it.

When Pocoyo and Pato's brick castle falls apart, they blame each other for it.