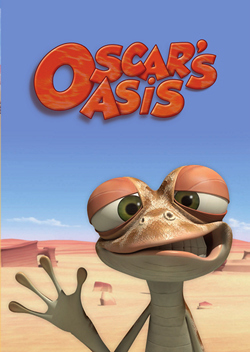 In a World… where food and water are harder to find than the garbage left behind, a lone lizard fights for survival against a tenacious gang of vicious desert bandits. Meet Oscar, a tiny reptile surviving in a hostile world. For him, every day is a battle. And every day is in danger of being his last...

Oscar's Oasis is a series of computer-animated shorts centering around the eponymous Oscar and his attempts at scavenging food in a nondescript desert. His main source of antagonism comes from a trio of desert animals who squabble with each other as often as they fight the other characters.

The formula of every episode promises several chase scenes, quirky animation, choppy editing, and absolutely no dialogue. Much of the cartoon itself seems largely inspired by the classic Wile E. Coyote and the Road Runner shorts.