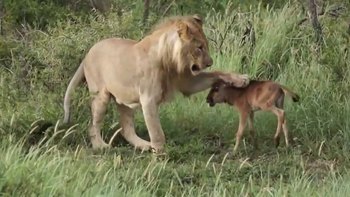 Once in a while, a predator may refuse to harm their natural prey or enemy, instead choosing to protect it.

The reasons may vary widely: the two develop kinship to each other, the "prey" is an orphan/has Parental Abandonment, the predator being helpless and the prey comes to help them, etc. The protection may extend to only one individual, to a small group (such as a family), or to the entire species or group. Said protection likely will include protection against the predator's own kind (related to Hunter of Their Own Kind).

This trope is different than Morality Pet in that the decision to become a protector is irrevocable and is likely to invoke a Heel–Face Turn on the part of the predator. Said protection may be permanent or temporary depending on whether the predator's intent is to return the Prey back to their family, group, or natural environment. (The intent is always what's best for the prey, yet another difference between this trope and Morality Pet.) Failure to protect the prey will cause anguish to the predator, especially if they have to watch. The younger/more helpless the prey, the more extreme, the more violent the predator will be in protecting them, up to full-on Papa Wolf or Mama Bear.

A predator is almost by definition badass, but a predator lacking fear and not even caring if they live or die is both unpredictable and scary. This trope seldom or never involves a sexual attraction/relationship between the two, and the predator may not even like the prey. Predators tend to be solitary hunters, but a Predator turned protector will both accept and solicit assistance in protecting the prey. The conclusive proof that that the trope applies is change: the predator is unable to return to their former ways at the end.

More cynically, any Empire will do this for its new subjects when it is well established simply because they are now taxpayers instead of prey. In another case, a predator may simply try to protect their prey from other predators so that they can have the prey all by themselves.

A Super-Trope to Androcles' Lion and a Sister Trope to Friendly Neighborhood Vampire. Expect Hitman with a Heart to do this a lot. When applied to hostage situations, this becomes Lima Syndrome. Animal examples will frequently overlap with Carnivore Confusion. Compare Bad Guys Do the Dirty Work where the bad guys saved the good guys from having to Shoot the Dog, often without meaning to help in the first place. Compare also In Love with the Mark when the would-be killer falls in love with the target, Defends Against Their Own Kind where a member of group X protects a member of group Y from other members of group X, and Adopt the Food where they had planned on eating them first.