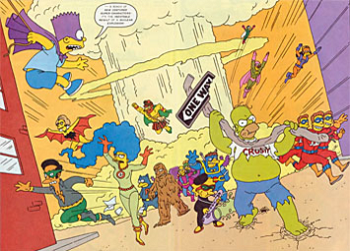 "I call it 'The Wall of Weird.' It's every strange, bizarre, and unexplained event that's happened in Smallville since the meteor shower. That's when it all began — when the town went schizo."
— Chloe Sullivan, Smallville
Advertisement:

In Super Hero stories, there are many, many ways to give the lead superpowers. However, sometimes it becomes cost efficient in terms of descriptive effort or setting construction to give every character the same super hero/villain origin story in a Mass Super-Empowering Event.

The Mass Super-Empowering Event serves to kick start the series (The Event usually happens in Act 1 or 2 of the pilot) and provide a handy reason for the entire cast to get superpowers. The Eventnote (For some reason, it's usually called "The Event" or some capitalized version thereof and the superheroes will never be called superheroes) can be technological, mystical, accidental, deliberate or unexplained, but it always serves as a tangible link between the heroes and villains. Sometimes, it will also kill some unlucky other people in the process, perhaps to discourage repeated usage.

So why do authors use this trope? After all, it reduces diversity of Super Hero Origin stories by repeating it across several characters. Well, it turns out that having fifty ways a Freak Lab Accident can give you superpowers got old, fast, forcing quite a few Meta Origins to be applied to tidy up the place. Another is that it frees the author from having to give exposition on the source of the powers to focus on the characters themselves and the way that they use their new powers, effectively giving more Character Development and characterization by showing how they react to getting great power — be it betrayal, smugness or responsibility. It neatly provides a ready-made reason for a connection between the hero and villain, especially if one of them (rightly or wrongly) blames the other for causing the event. In settings where this event is the one and only source of superpowers, it can help enforce a Like Reality, Unless Noted "feel" for the setting, contrasting with standard comic book universes. Lastly, the cause for The Event can be a major plot hook for the hero(es) to unravel throughout the season.

A sister trope to Meta Origin, in which multiple seemingly unrelated super-empowerings are retconned into having a common origin. Compare Bizarre Baby Boom. Contrast Randomly Gifted. And do both with World-Wrecking Wave, which may have this as a side effect.