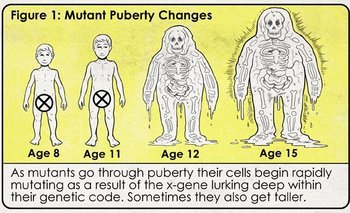 "And like all puberty-induced superpowers, it comes at night, while thunder claps."
— The Nostalgia Chick's review of

The acquisition of superpowers or abilities at the onset of becoming a teenager, roughly between the ages of 12-16. This is probably to avoid the inherent danger of a child or baby casually using powers in a potentially destructive manner or, if there is one, blowing the Masquerade. However, more often, it works as a rather transparent metaphor for puberty.

Curiously, few such teens have trouble figuring out How Do I Shot Web?; apparently, the powers are just instinctive. This doesn't stop mentor figures from putting them through training to master those abilities, however.

Nearly all current "dramatic" superheroes with "natural" superpowers (such as Marvel's mutants) receive them as teenagers. In fact, the trope originated with the creation of the X-Men in the 1960s and was probably developed to appeal to the overwhelmingly teenage readership of comic books at the time.

This in turn was possibly influenced by the folklore about poltergeist manifestations being associated with adolescents, which in turn has been interpreted as a metaphor for sexual awakening.

See also Dangerous 16th Birthday and Human Alien Discovery. Compare The Call Put Me on Hold and sometimes Fictional Age of Majority. Contrast Growing Up Sucks where a character possesses a power throughout childhood, but loses it at puberty instead.