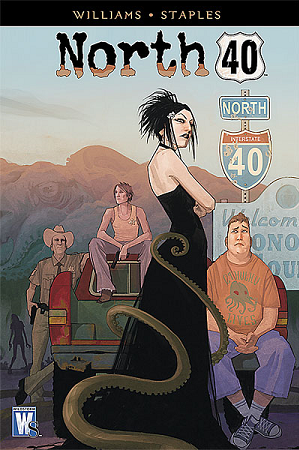 Comic book miniseries from 2009, written by Aaron Williams and illustrated by Fiona Staples. It could best be described as "magic hillbilly superheroes fight Cthulhu."

It starts off with a couple of high school kids in a small town getting an eldritch spellbook through Interlibrary Loan. They read it, everyone blacks out, and when they wake up, the county is cut off from the rest of the world, and half the people have been turned into monsters. Some people use their new abilities to do evil, some to do good, and some just focus on trying to live their lives as normally as they can.