Hats Off to the Dead 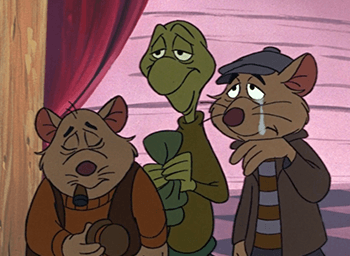 Watching someone you know dying is hardly a pleasant experience. Having to bear news of a loved one's passing is also difficult. Just knowing that a close friend is dead carries with it incomparable pain.

And if those people sport a Nice Hat, there's a healthy chance that it's going to be on their chest rather than their head.

Taking off one's hat in response to someone dying is one of the most widely recognized means of paying respect to the deceased. It tends to convey the message that the hat wearer is truly shaken by the dead no longer being among the living. That the mourner is truly offering their sympathies to the deceased.

The hat usually comes off after the mournee is dead (or is believed to be dead), but there are cases of hats being doffed if it's believed that death is inevitable and fast approaching or because the mournee-to-be is undertaking a seemingly suicidal action.

Subtrope of Due to the Dead.

Not to be confused with Dead Hat Shot, where a lone hat is used to convey the demise of the wearer.

As a Death Trope, be prepared for unmarked spoilers!